From the Vaults: Teaching Multimedia 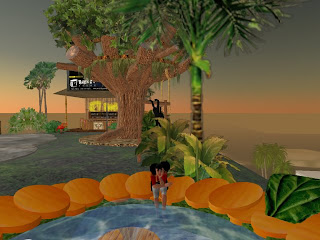 It seems like “Second Life” is everywhere and lately it appears the virtual world, populated with over 1 million “residents” weekly, has seeped into the academic world as well. Last week an online virtual conference on religion was held by a Journalism prof and his students at the University of California at Berkeley.

As I watched the footage of the avatars (animated versions of the ‘players’) speak about virtual religion, I admit I grew restless listening to (what looked like to me) an intellectual ‘cartoon.’ But at the same time, I hold out for some kind of interesting international exchange in the virtual space. Could Second Life and other games like it be the wave of future transnational collaborations?

There are currently well over 60 institutions engaged with “Second Life” education initiatives. While some of these are conducted by those at the cutting edge of technology research and geek-dom, others, like the digital communication prof at NYU experiment because she got introduced to Second Life by her teenage son and she thought it might help to engage her increasingly digitized students.

One prof I encountered writes a blog on the educational research opportunities in Second Life. On the right is the dorm room she created for her students.

Here is an article about two profs who created an interactive ‘game’ for their Journalism students. Their game mimics a newsroom. In the piece, the profs explain their need to expand their curriculum to meet the changing needs of students interested in more interactive ways of learning.

Whether or not the use of Second Life increases the engagement of student activity and analysis is yet to be seen. But if the Pew stats are true, and more than 70% of college aged students engage in some kind of digital game and role playing, students are more than likely to at least initially respond to the effort made to enter their worlds. Particularly at this crucial time in our history: student engagement is critical. We need to assist our students to become the best analytic thinkers, with a curiosity for transnational contexts and complexities. These are mandatory tools of our civil society ‘s survival.

I’ve tried out Second Life myself and while it held my visual interest for a short time, I just could not get into the virtual aspect of the meeting place. But I’m curious to explore more to see what benefits this might have for my media students. Below is an image from a recent Globe and Mail report on the InterAccess arts school in Toronto offering virtual video instruction this summer.

For more information, you could try looking at secondlife.com/education and newsinitiative.org.